After a little over two years gathering parts, consulting community friends and planning what I wanted, earlier this month I finally managed to put together my ultimate build. I wanted to build something that would help me in my everyday tasks and it had to be beautiful! Interacting with all of the guys who assisted me in the process was a great journey and I enjoyed it a lot.

During these years, multiple times I purchased parts that would either get lost in transit (due to my horrible local customs) and receive replacements that didn’t quite work together. Cases that didn’t work with the PCB, plates that got bent or didn’t work with either the case and/or PCB, etc. I had a couple problems but I slowly managed to gather everything and conclude the project! The final result is exactly what I had in my mind.

I requested Hojin to pre-assemble it (there’s an option in the checkout), so all of the diodes, RGB underglow pads (it has 16), resistors and the controller as well were soldered by him. My soldering equipment isn’t very accurate and my lack of skills wouldn’t be enough for such small components. All I had to do was solder the switches of my preference and install the stabilizers (which are required for long keycaps such as the space bar, enter and others). If you’re looking to solder, I recommend getting a soldering iron 25W – 30W since they work in the 360 °C – 375 °C range, which I find to be the optimal temperatures for 63/37 fluxed solder. Getting a soldering sucker is also recommended in case you want to desolder things later down the road.

In my experience, swapping stems into Zeal housings is great way to improve the smoothness and downstroke of the switches. The clicky sound generated by the Blue stems also became crispier and less high-pitched, which is a feature that I love. I used to have Gateron Yellows on my previous board and they were fantastic, but I wanted to experience clicky switches and I instantly fell in love with them. I decided to have a Gateron Yellow for the spacebar and fine tuned it to avoid fatigue and improve it’s sound – it’s amazing. I don’t enjoy tactile switches and I like to think that Blues are clicky linears, since their tactility is so subtle. Much less pronounced than Browns and Zealios (all variations) as far as I can tell. The swap for Zeal housings is also something that I was really looking forward, because it allows the light from the underglow effect to come all the way up through the plate. So the underglow shine also acts as a backlighting (which is further improved by the mirror finish of the plate). Couldn’t be happier with the outcome.

Because I use the ANSI layout I didn’t want my plate to have that huge ISO enter gap. But I wanted to have some universal features implemented in the design. That’s exactly what me and Brian achieved. First of all all of the cuts allow for easy switch top opening, in case I wanna swap stems or mod the switches. Then we came up with a standard bottom-row and an option for either 1.75u right shift + Fn or 2.75u right shift. It also has a universal cut for caps lock, so I could pick between stepped or non-stepped (I decided to go stepped) when soldering that switch. Finally, this amazing plate provides me with the option for either 2 x 1u or the regular 2u backspace at the top left corner. The mirror finish is beautiful and shines like a beauty. 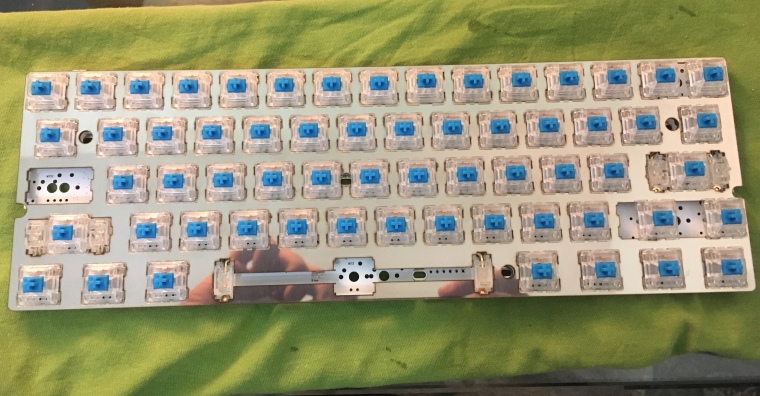 The opinion on these are vastly different, but speaking from my experience I think they are amazing. I wanted transparent stabs in order to have the underglow to backlighting effect (provided by the transparent switches’ housings, as I previously explained) on my stabilizers as well, and they do exactly what they are supposed to in this regard. I also lubed the stems, housings and the gold plated wires and I definitely recommend doing so. After using the keyboard for this past couple of weeks I can tell that they are much superior to my old KBP V60 stabs and the regular Costar stabs. The Zeal stabs feel very smooth up and down, and I’m not being able to notice any rattle. Despite it’s price tag, which is a bit of a turn down, I think it’s fair to say that they are not even comparable to normal stabs and worth the upgrade. 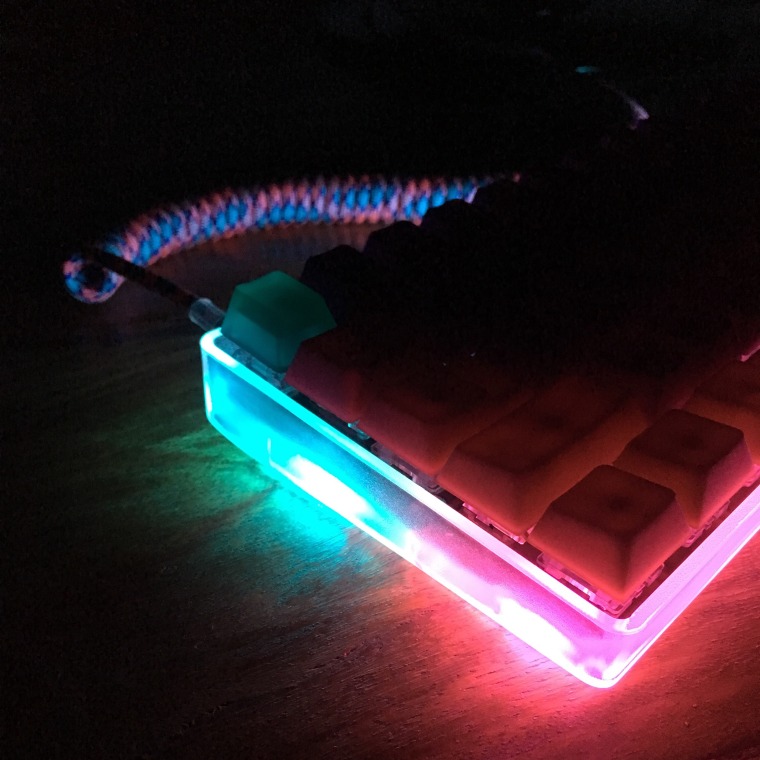 I acquired this case from brand new from a friend that I met along my journey but it required a bit of modding, in order to properly flush with the B.Face X2 PCB. The case seems to be an injection clear version of the Poker II case so it has some structural horizontal bars that had to be removed – as they were colliding with the underglow pads. I carefully removed each one of them using a cutting blade and pliers, it took me quite a while to get it done. I wanted to go slow in order to prevent scratching the case, so if you happen to go through the same process I recommend that you take your time and go slow.  During the planning phase of the build I considered purchasing a Rust Oleum Frost Glass spray can in order to apply the frost finish to the inside of the case, in order for it to diffuse the RGB better. But to be entirely honest I don’t think it’s worth it, because the case already diffuses light pretty well. Much better than I thought it would be.

Braided coiled paracord with gold plated connectors and clear heatshrink, by Sam. A great friend who is in charge of MechCables also known as /u/90N1NE from Reddit. His work is just incredible and the coil looks super. The paracord has an amazing texture and the coil feature is very robust. I can tell it’s gonna last for very long, possibly a lifetime. His customer support is fantastic and turnaround time for orders is always blazing fast from what I’ve seen. I have no clue how this cable managed to travel all the way to Brazil in only 8 days, untaxed, via regular USPS. Pure wizardry.

I was looking for a complete keycap set that would cover both ANSI and the fancy HHKB variants. Feng’s version of this keyset was exactly what I needed. Spongy bright white, directly delivered to Clay also known as /u/CRJ3012 in the USA so he could hand dye. We went with purple for the alphas and candy pink for the modifiers. By the time this was ordered, Clay couldn’t achieve the cyan tone I was after which was unfortunate. I was ready to get some GMK blanks to highlight the keys I wanted but a couple months later he informed me he had cracked the tone. Fortunately at the time, he had extra blanks – including short right shifts, R4 Fns, bottom row modifiers, a couple R2 1.5us and a ton of R1 1us – exactly the highlights I needed. This extra order was quite the steal and I’m super happy with how it turned out.

There’s a myth in the mechanical keyboard communities that the endgame keyboard does not exist. But after interacting with all these guys, meeting incredible people and building this project, I believe that endgame is a journey, rather than a destination. In other words, I don’t think I’ll be building another keyboard anytime soon!

We done this together fam!🧞 Beautiful crisp picture and board by @japanesehorrorwriter 💜
@kobebryant 💜💛🐍 Just a small tribute to my favorite athlete of all time and one of the most legendary men to ever live. Thank you for the inspiration and life lessons. #mambaforever
Muse, hero, role model. 🐍 #mambamentality
Godspeed SA.GMK covers the Alice style keyboards, and also almost every mech keyboard! 🚀 Head over to the link in bio and see what will be available! The render is an OSA keyboard with Genespeed SA, keyboard designed by @blindassassin111 🚀
Godspeed SA.GMK project update! 🚀 I have tweaked many kits, including the GMK ones. Head over to my link in bio and verify the current kits. Sale is going live soon, stay tuned for the @drop! As for the picture, this is a Godspeed75 keyboard designed by @fropsie__ and BlindAssassin111. Sale for the exclusive keyboard goes live at 9 PM EST at @thekey.company! Godspeed y’all! ✌🏼🚀
Is this endgame? 😈 shot by @ninjapirate9901 ft Mitolet GMK, thanks for the support chief! 💕
Back from a much needed break, let’s start 2020 with some Pulse GMK?! Picture by uSpacebarFlipper 🧞‍♂️
Last call, decent PBT keycaps for $70. Drop closes this weekend, buy at @drop!
Laseron MX Sale! 🦄 These exclusive linear switches were specially made by me and Gateron, they look amazing with Laser GMK, Laser SA and any set really! Swipe sideways to see the variations and options available. You can purchase these MX switches at KBDFans, for a limited time. Link in my bio! Are you getting the Laserons?!
Treecaps - Keycaps for charity! 🌲🍃 @drop and I developed these cute little keycaps with tree logos in them. 100% of the sale revenue (not profits, revenue) will be convert in a donation for the #teamtrees project. They are made in light green thick PBT plastic and a match nearly any keycap set! Who’s with us?! Link is in my bio!
DROP IS LIVE! 💸 The amazing Pegaso PBT keycap set sale is live at @drop! The pre orders will be open for 4 weeks. Link for this custom inexpensive PBT keycap set is in bio, make sure you don’t miss it if you’re a fan. Stay tuned for the upcoming deskmat and collab cable/artisan sales! 😉🙏🏻
Final update on Pegaso is live, page has been updated with final kits. Check it out in my bio! 🐴🦄
@brandon_schlack killing with the Laser decks! 💕🦄
Canvas and Wonderland, love the Bauhaus accents! Picture by @sayitaintjonas
88 UNTIL FOREVER 🦄
MITOCORN - FOUNDER’S EDITION KIT 🐴⚠️ What if we made a flashy colored Pegaso x MiTo monokit for the 1st inaugural run of Project Mythos?! Head over to my stories and place your vote! 🦄
PEGASO PBT UPDATE! ⚠️🐴 Tentative prices, new deskmat designs and more novelties! mitormk.com/mythos
And some more gaming, again! 🔫
Some 1337 gamery for today! 🦄
Electronic components cutely decorated by Canvas 🎨 amazing build and photograph by @andrea_acs | Gingham designed by @yiancar1