Today I’m happy to officially announce the release of an all new keycap set project that I’ve been working on recently, conceived to rethink some rules and expand new routes that I felt were unexplored in our community. For the past couple of years I’ve been experimenting with theme implementation – like Godspeed and optimization for customization possibilities using logic – as seen on Overcast. The result of this work is Canvas – a XDA profile keycap set for MX stem mechanical keyboards.

I decided to go further and step beyond some boundaries and limits that I had, for some reason, previously established in my head. This time I attempted to dive deep into the brain work of designing, implementing a meaningful theme while rethinking the standards for this niche – Why are the legends always like this and why are the icons always like that? I’ve kept asking myself, while questioning how could I create something classy and at the same time, innovative.

So I studied, watched and read. Canvas is the result of weeks of a work strongly influenced by Braun aesthetics, the work of Dieter Rams and the iconic Apple mechanical keyboard from the 90’s – AEK.

From the beginning it was hating the sixties American way of styling. Especially the cars. They changed their cars every two years to sell new ones. Which has nothing to do with good design. – Dieter Rams

The font – Readability, elegance and aesthetics

A balance between lower case and upper case characters is not a feature exactly present in the keycap sets available in the market.  The AEK made such a good use of it, but ultimately it’s a style that disappeared. I’m bringing it back. The stroke, radius, scale and spacing of every character was carefully developed and created by hand as a result of strong typography influences such as Univers from Apple, Kostić’s Mongoose, Mariya’s Kizo and others.

The proportions between alphanumeric characters & modifier legends were mathematically conceived, and precisely adjusted, to the factor of 1.35 in height. The kerning was adjusted to 1.61. Tall characters like f, g, t, etc. were calibrated accordingly – stroke first & then height (for proper alignment), while all of the legends were positioned to the visual center of the top left surface position of each keycap. 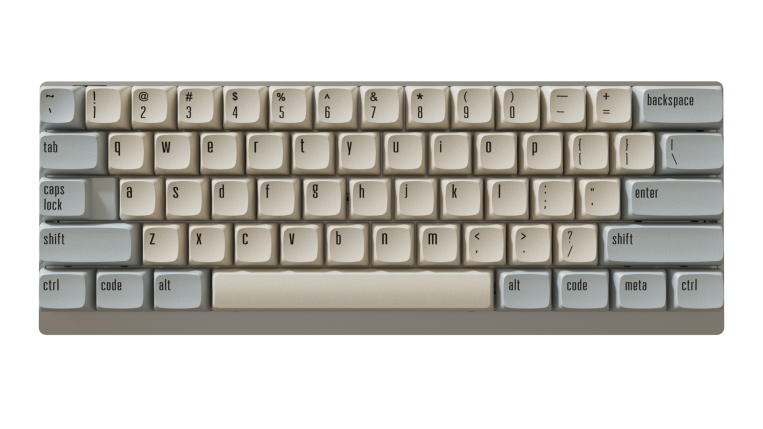 Iconography and kits – Recreating the convention

Dieter Rams’ 10 Principle of Good Designs is the cornerstone of Braun, and I wanted to apply its concepts on Canvas. The icon convention implemented had to be aesthetic, innovative and honest – no more valuable than it really is . The language created was thorough down to the last detail and no aspect of it was arbitrary or left to chance. To make this tangible, unobtrusive and understandable symbols were hand drawn, using either two or three geometric elements – as little design as possible.

An example of the th

ought process behind the Control icon. Every symbol was developed after the same concept – immediate correspondence to an object that relates to the original legends.

The kits offered provide useful keycaps and the balance between affordability and customization was again preserved. Good design is environmentally friendly and a palette with pastels & colorful strikes was conceived – so the spectrum ranging from office cubicles to gaming rigs could be properly covered.  The long lasting PBT material was selected for this project and its ever lasting polymer characteristics were combined with the never fading dye sublimation process for the legends.

Coming next there will be a post detailing the child kits that will be offered in the group buy – which is going live 19th, January 2017 at Massdrop. I hope you are excited about this project because we have a wonderful drop in the works, so feel invited to visit the drop discussion page and contribute with your criticism! I appreciate your visit once again, let me know what you think about my work! You know where to find me.

You mean a lot to me.